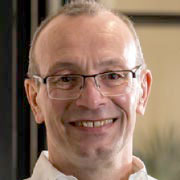 Chairman, Head of Biology and Co-founder

A cell biologist and biotech entrepreneur, Roberto brings to Myricx unique perspectives that align science and business with the operations required for start-ups.

In addition to his role as CEO at Myricx, Roberto is also a Visiting Professor at Imperial College London and a member of the Translation Advisory Board of the Francis Crick Institute.

Previously, he was Vice President and Head of Biology in the respiratory therapy area at GlaxoSmithKline, UK.  He spent four years as CEO of MRC Technology (now LifeArc), the technology transfer arm of the MRC, where he helped the creation of spinout companies including Heptares. Before this he was an Advisor to Apax Partners, London and an Entrepreneur in Residence with Abingworth Management where he helped start a number of companies including Astex Pharmaceuticals.

He has served on the board of several biotechnology companies and is currently a Venture Partner with Brandon Capital Partners.

Roberto obtained a BSc and a PhD from the University of Nottingham, UK.