Myristoylation, is a lipid modification to a specific group of proteins that allows them to interact with other proteins or membranes.  It is catalysed by the enzyme N-myristoyltransferase (NMT) which introduces irreversible changes to human proteins and is known to be involved in a range of diseases including cancer, inflammatory conditions, epilepsy and Alzheimer’s disease.

Myricx is based on over 15 years of research focused on the function of NMT and on gaining a deep understanding of its enzymology and structure, as well as biology.

We have active programmes targeting NMT in cancer and viral diseases.

Our NMT research has been published in a wide range of prestigious peer reviewed journals.

Myristoylation involves the attachment of myristic acid, a 14-carbon fatty acid, to the N-terminal glycine residue of specific target proteins in the cell. The process is catalysed by the ubiquitous eukaryotic enzyme, N-myristoyltransferase (NMT), which uses myristoyl-coenzyme A (CoA) as a substrate (Figure 1).

Myristoylation typically occurs co-translationally on newly synthesized polypeptides located on the ribosome following cleavage of the initiator methionine by methionine aminopeptidase. However there is also evidence that NMT-mediated posttranslational modification of proteins occurs after proteolytic cleavage of an N-terminal glycine residue.

Using chemical biology techniques around 150 to 200 proteins have been identified in cells that are myristoylated at their N terminus.

In humans there are two genes and isoforms for NMT (NMT1 and NMT2) which have very similar sequences in their catalytic domain; it is not yet known if they have distinct roles in the cell. Myricx is focused on developing inhibitors against both.

Along with our collaborators, we have taken a series of structural snapshots of NMT1 at high resolution which revealed the exact conformation of the enzymes active region during the entire catalysis process. These structures, generated by X-ray crystallography, involved co-crystallising the enzyme with reactive lipid and peptide substrates to clarify exactly how myristoylation occurs, and how the peptide/protein substrate is modified.

This study revealed unforeseen details about how NMT1 reaches a conformation in which the reactive groups are brought into close proximity to enable catalysis.  It also demonstrated that this mechanism further supports efficient and unprecedented myristoylation of an N-terminal lysine side chain, providing evidence that NMT acts both as N-terminal lysine and glycine myristoyltransferase (Dian et al 2020).

This unique structural and conformational insight is critical for the development of new chemical inhibitors of NMT1, with potential to impact numerous medical conditions including cancer. 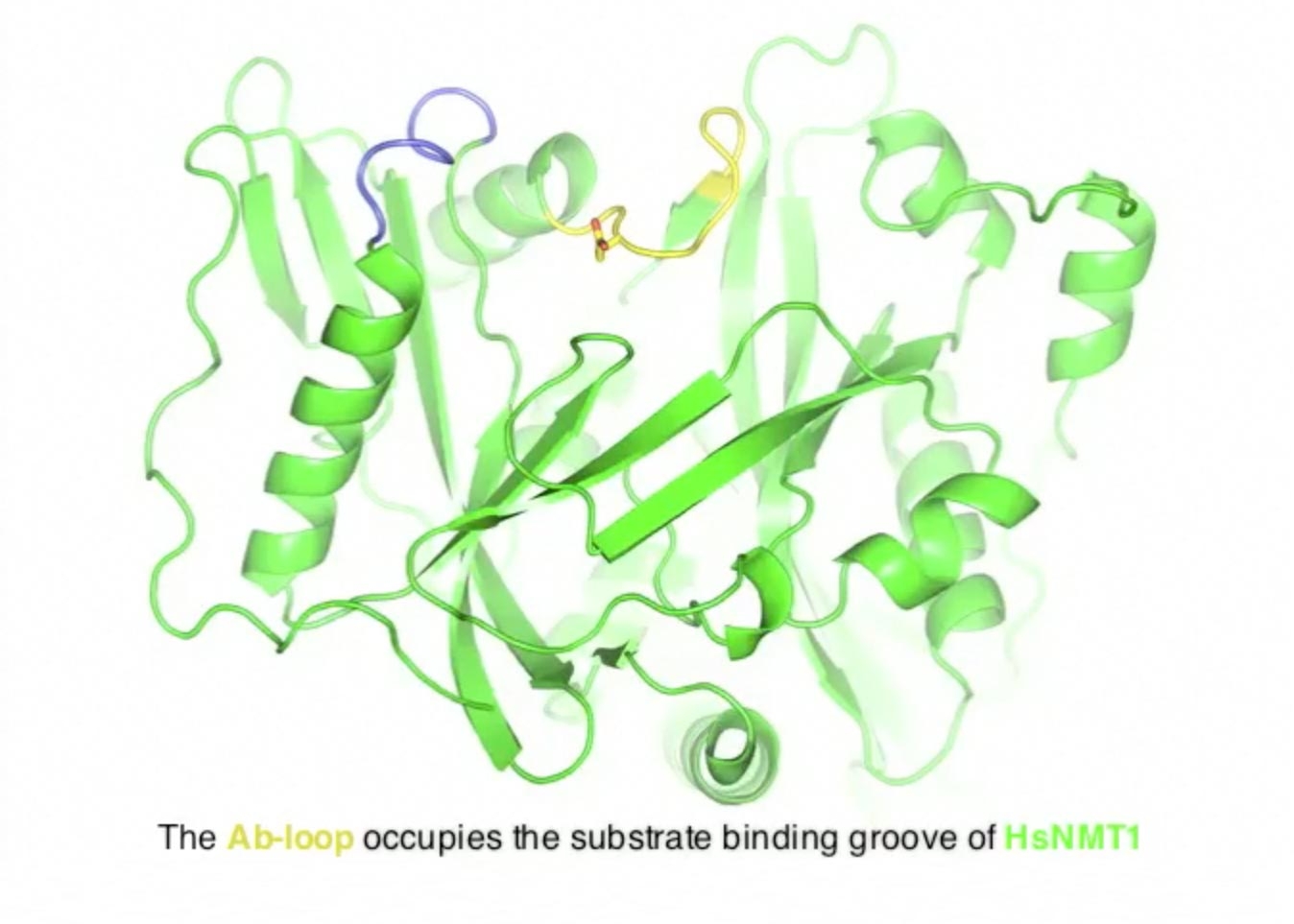 While NMT is a well validated as a target in trypanosomiasis, malaria and viral infections it is an emerging drug target in cancer.

Learn more about our cancer and viral infections programmes.

Myricx is based on novel discoveries from the research laboratories of its co-founder, Prof Ed Tate. Learn more about his laboratories’ research: http://www.imperial.ac.uk/tate-group/