While NMT, an enzyme involved in myristoylation of certain proteins, is now an emerging drug target in cancer, it was first proposed as a potential cancer target in the 1990’s, when N-myristoylation of the oncogene c-Src tyrosine kinase allowed it to tether to the cytoplasmic membrane and carry out its kinase activity in cancer cells.  However, there are many more proteins in the cell apart from c-Src that are myristoylated.

The Myricx collaborative team has pioneered the understanding of how selective NMT inhibition leads to dose-responsive loss of N-myristoylation on more than 100 protein targets in cells and proteome analyses suggests that cancer-implicated myristoylated proteins map into multiple biological processes such as translation, ER stress, metabolism and transcription that are dysregulated in cancer. (Thinon et al, 2016).  Although NMT has been proposed as a target in cancer, a rationale for its selectivity has been lacking due to the complex impact of NMT inhibition (NMTi) on these multiple cellular pathways.

Recently, data from large scale screens of hundreds of cancer cell lines against a panel of potent and selective NMT inhibitors was combined with system-level analyses to identify that inhibition of NMT, results in specific cancer cell killing via an unexpected and unique mechanism.  This breakthrough discovery reveals that NMT inhibitors are proving to be highly effective in the treatment of MYC-driven cancer models. Until now MYC was considered to be undruggable. Myricx is now prioritising the development of potent small-molecule inhibitors with the aim of building a proprietary pipeline of targeted cancer therapies.

Read more about the role of NMT in cancer

The Myricx collaborative team has been actively studying the role that myristoylation plays in viral pathogens. Based on their discoveries, Myricx is uniquely positioned to advance anti-viral therapies that selectively target NMT from the lab towards the clinic.

Interestingly while the vast majority of viruses lack the enzyme NMT, they have myristoylated proteins in their structure as a result of the host enzyme performing this modification. Furthermore, bioinformatic analysis of viral genomes reveals that many viruses have proteins with an N-terminal glycine suggesting that they have an acceptor site for myristoylation. In many cases, these predictions have been validated by experimental evidence and myristoylated viral proteins have been implicated in interactions with host proteins and virus assembly, budding and in viral entry.

Rhinoviruses are the pathogens most often responsible for the common cold and are a member of the  Picornaviridae family that includes other important human and animal pathogens, such as poliovirus (PV), foot-and-mouth disease virus (FMDV), coxsackievirus, hepatitis A virus and enterovirus 71 (EV-A71).

While the cold is an inconvenience for many individuals, it frequently causes serious complications in those with asthma, chronic obstructive pulmonary disease and cystic fibrosis. Therefore, approaches to prevent rhinovirus infection in such patients would give significant benefit.

In 2018, the Myricx collaborative team published a seminal paper in Nature Chemistry on the discovery of IMP-1088, a new class of drug molecule, and dual inhibitor of human NMT1 and NMT2, that rapidly and completely blocked the rhinovirus from replication in human cells without cytoxicity. (Mousnier et al.).

Figures (a and b):  Proposed pathway for the generation of infectious Rhinovirus (RV) particles in an infected host cell.  IMP-1088, intervenes at the final step of viral replication, when new viral RNA genomes are packaged into the capsid and, thus, halts infection.

a. RV polyprotein is synthesized in the host, where it undergoes co-translational N-terminal methionine excision by host methionine aminopeptidase (MetAP) to reveal an N-terminal glycine, followed by the N-terminal N-myristoylation by the host NMT.

b. Capsid assembly starts with cleavage into VP0, VP3 and VP1 by RV protease, and assembly into protomers, which then assemble into pentamers and then into an icosahedral capsid that encloses the RV RNA genome; finally, VP0 is processed into VP4 and VP2, and mature infectious virions are released.

Our data showed that inhibition of VP0 myristoylation by IMP-1088 blocked a key step in viral capsid formation  such that a fully assembled virus could not be detected. We found that NMT inhibition caused a marked decrease in the amount of VP2 protein produced. As the cleavage of VP0 to generate VP4 and VP2 only occurs in fully assembled virus particles, the absence of VP2 supports the conclusion that NMT inhibition of VP0 myristoylation blocks the assembly of infectious virus particles.

In addition to demonstrating the low nanomolar antiviral activity of IMP-1088 against multiple rhinovirus strain in vitro, the scientists also tested its activity against other picornaviruses including poliovirus and foot and-mouth disease virus. The results showed that IMP-1088 protects cells against virus-induced killing, highlighting the potential of host myristoylation as a drug target in picornaviral infections.

Myricx’s collaborative team established a new series of human NMT inhibitors discovered through an unusual fragment reconstruction approach that used a high-throughput screen to test small-molecule inhibitors that they had previously developed against NMT enzymes from pathogenic fungi and parasites. It was reasoned that if they could find an existing molecule with low affinity for the human NMT enzymes, they could then optimise it.

As predicted, they identified two small-molecule inhibitor fragments of NMT from Plasmodium falciparum, the protozoan parasite which causes malaria. Cooperative binding between these weak-binding fragments was shown which led to rapid inhibitor optimisation through fragment reconstruction, structure-guided fragment linking and conformational control over linker geometry. This optimisation process was monitored via x-ray crystallography, until the new inhibitor fit closely into the human NMT‘s active site. The resulting lead compound in the series –  IMP-1088 –  is more than 100 times as potent as the starting molecules from which it was built. 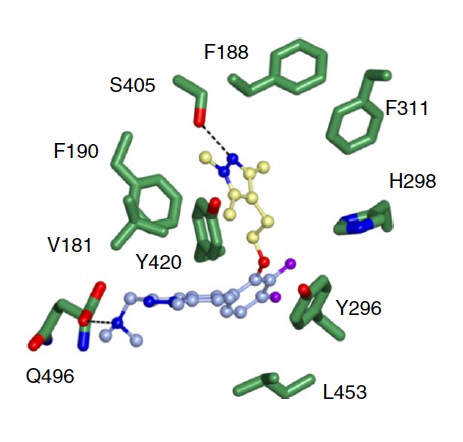